Start a Wiki
Yakumo Tsukamoto is a girl that carries a strong presence with her wherever she goes. She can hear the thoughts of people who have strong feelings for her, a member of the Tea Club and she works at Cafe Mercado.

Yakumo makes her debut appearance in chapter 1 of the manga (Episode 1 in the anime). Her picture appears on the cover of Volume 2. She is also the featured character of the second image album.

She is also referred to as Imouto-san/Tenma Tsukamoto's sister by Kenji Harima.

Yakumo is a beautiful, shy, smart, caring and soft-spoken girl with strong family ties. Thus, in Yakumo's case, her dependency would be Tenma Tsukamoto and Yakumo has a strong personal duty to house work, cleaning, and is very diligent and well-mannered. She accepts the social position of caretaker and executes her responsibilities without complaints. She does not have a personal agenda or goals and her sole desire is to serve her family.

This persona relates her closely to the generic female role in Asia but also crosses her over into another classification "the Housewife", or Yamato Nadeshiko, which is commonly found in male audience oriented anime. On top of her house duties, Yakumo's demure and shy nature blends with her acute mannerism to portray the perfect wife candidate. This character trait is further emphasized by Yakumo's ability to excel in almost everything, such as sports, schoolwork, and games. She is well knowledgeable and elegant yet has a high tolerance. She is never overtly angry nor does she show signs of frustration. Despite this, she has quite a taciturn and calm personality, she speaks much and mumbles somewhat childishly when embarrassed. Additionally, she has a sleeping habit on some place and for this people call her Spring Goddess.

Yakumo works at a local Cafe in Yagami called Cafe Mercado. There she is a waitress serving customers and assisting them like a normal restaurant waitress. Cafe Mercado's dress code encourages different outfits for seasonal occasions.

Yakumo has multiple talents. She is capable of reading minds as well as drawing manga. Yakumo appears to succeed in everything she does (aside from skiing)

Yakumo has an ability to hear the thoughts of people who have a love interest in her. This happens often throughout the story, creating awkward moments for her. Her psychic ability is a slight deterrent as it keeps her from developing feelings for most guys. However, one character that does intrigue Yakumo is Kenji Harima. His infatuation with Yakumo's older sister Tenma Tsukamoto, keeps Harima's thoughts shrouded from Yakumo. These circumstances contribute to the development of a somewhat normal relationship between Harima and Yakumo (However, Yakumo does develop romantic feelings for Harima). Because of Tenma's sisterly love for her, Yakumo is also privy to her thoughts.

Her cooking ability is far above par. You see Yakumo's cooking in several occasions throughout the series. The other characters always comment on her exceptional culinary skills. A few memorable instances are when she makes Onigiri for Harima when he comes to her house to fix her AC. Another instance is when her sister has a sleep over and Yakumo serves the girls dessert. Another one is when she cooked fish for that stray black cat. (Iori)

Yakumo is talented and well trained when it comes to sewing. One occasion where you see an instance of this is in Episode 24. Previously Eri had made repairs on a jacket of Harima's. Without knowing, Yakumo sees the poor stitch work and repairs it herself with an exceptional result.

Yakumo is Tenma's younger sister. However, their roles are often reversed with Yakumo being the primary caretaker of Tenma; she is also sometimes mistaken as the older sister of Tenma, due to the latter being shorter and possessing a more childish personality. Yakumo has a very close relationship with Tenma and is very protective. One example would be Episode 8 when Tenma is attempting to cook a curry dish for Ooji Karasuma. Although Tenma remains reluctant and refuses Yakumo's help, Yakumo continually comes by to check on her. Then Tenma accidentally lights the stove on fire and Yakumo comes to extinguish her engulfed curry. This metaphorical example illustrates the kind of protective relationship Yakumo and her sister can have. Contrary to Yakumo's usual role with her sister, Tenma has acted in a protective manner about Yakumo. In Episode 16 during the camping trip, Yakumo becomes increasingly friendly with Harima. Due to certain situations in previous episodes, Tenma has a poor opinion of Harima and warns Yakumo to stay away from him.

Yakumo is rather self-kept when it comes to socialization with other characters although unbeknownst to her, she is very popular in school. By far her closest friend is Sarah Adiemus, a fellow Class 1-D student. Sarah introduces Yakumo into the Tea Club which Sarah is a member of. The background behind the beginning of their friendship isn't introduced until the 1st OVA episode. During this episode, Yakumo is chasing after her cat Iori when suddenly a fierce dog appears. Yakumo, not being comfortable with dogs, becomes scared. Sarah then appears and scares the dog away saving Yakumo. This forms a relationship between the girls and they quickly become best friends.

Yakumo takes Shuuji into the Tsukomoto home for a brief period to get him out of the rain, and Shuuji has a deep admiration for her.

As Yakumo is very close to her sister and goes on trips and other activities with her, Tenma's three best friends are fairly close to Yakumo as well. Akira and Yakumo work together on Tea Club activities as well.

Due to the frequent misunderstandings that Yakumo was going out with Harima, Eri and Yakumo have a slight rivalry that has manifested itself most notably during the school Cultural Festival play. During the walking festival , when Harima and Yakumo kissed , Eri was very angry and jealous on her and she thinks Yakumo is doing it on purpose.

Although Yakumo's relationships with other humans are often hesitant, she always seems to have an interest in animals. Early on in the series, Yakumo is seen making an extra bento box. We later find out that Yakumo has prepared a meal for a stray cat at the local Yagami Shrine. The relationship that Yakumo has with Iori starts out gradually. Iori acts timid around people and at first, Yakumo is no exception. Further into the story, their relationship begins to build. Iori eventually becomes the Tsukamoto's house pet and makes random appearances in a few different episodes.

The only male whose mind she cannot read, Harima helps Yakumo to discover an interest in manga, an interest that she later pursues by taking manga editing lessons. Harima considers Yakumo his closest friend, and Yakumo clearly cares deeply for him, going way out of her way to help him out. Eventually, Yakumo falls in love with Harima, but refuses to have a relationship with him because of Harima's love for her older sister, Tenma. It remains unknown whether Harima felt the same way about Yakumo, but it is unlikely due to him still being in love with Tenma.

She started to build feelings for Harima when Harima helped Iori discovering that he likes animals too made way for Yakumo to develop feeling for Harima but same with Eri, Yakumo's relationship with Harima was built due to a lot of misunderstanding. Yakumo has never been on dates with Harima, but does present feelings for him throughout the later episodes of the anime and within the manga also. Yakumo fell in love with Harima after spending more time with him (helping him with his manga). When Yakumo was able to read Harima's thoughts (For the first and last time) saying "She was cute". that time Harima was being delusional and he mistook Yakumo for Tenma. Eri, however, was angry to figure out that Yakumo liked Harima just like her, and tried to make sure Harima didn't end up with her. Yakumo admits her feelings to Harima, but Eri wouldn't accept it, and tried to get between the two. mistaken as his Girlfriend they are misunderstood and usually end up in a romantic environment during the Walking Festival she accidentally kissed Harima (later was proven have been lips to lips)

In manga , Volume 21 chapter 258 , Harima told Yakumo that they get together from now on, then Yakumo tried to confess her feelings but before she finish, Harima interrupted and said she love manga and they will continue it as long as they are good as Karasuma. 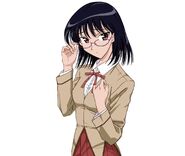 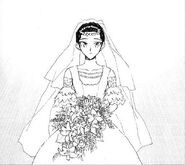 Add a photo to this gallery
Retrieved from "https://schoolrumble.fandom.com/wiki/Yakumo_Tsukamoto?oldid=9728"
Community content is available under CC-BY-SA unless otherwise noted.