The New School Year! Be Still My Heart! Love Letter Mayhem! Warp Speed on a Bike! is the first episode of season one. It aired on October 5, 2004.

The two protagonists, Tenma and Harima, are introduced as second year high school students who are in love with Karasuma and Tenma, respectively. At the start of the term, Tenma manages to be in the same class as Karasuma but finds out that he is moving to America. With luck and perseverance, Tenma anonymously convinces him to stay for the year.

Elsewhere, Harima has a rockier start in his pursuit of love. He struggles to get into the same class as Tenma and has his plan to confess foiled. His intended rendezvous with Tenma coincided with a challenge from Tennoji, a delinquent he had beaten up a few days prior. Harima is ultimately unable to meet with Tenma but learns from Tennoji's rejection that he has to build up a relationship with her before he can confess.

As Karasuma bikes home, both Harima and Tenma coincidentally get the same idea of biking to school to get closer to their respective romantic interest. In the end, this plan fails as they both have to chase after their targets due to Karasuma's unnaturally fast biking speed.

Tenma Tsukamoto, a 16 year-old high school student stands under cherry blossom trees and ponders the word “love.” She hopes to say it to the person she likes. Tenma’s reverie is interrupted by her younger sister, Yakumo, who accompanies her the rest of the way to Yagami High School. Once they reach the entrance, Tenma spots Ooji Karasuma, who is revealed to be the person she likes. Tenma expresses to her sister that she’s been praying for Karasuma to be in the same class for the start of this new term. After Yakumo cheers her on, Tenma goes off to look at the class listings.

Elsewere, Kenji Harima, a delinquent, has just finished beating up a gang of people. He, too, ponders the word “love,” in the same fashion Tenma did. He then rides off on his motorcycle in the direction of the school, excited for the start of the new term. As he gets to the school, he overhears someone calling Tenma, who is revealed to be the person he likes. He becomes determined to be in the same class as her and unknowingly punches out a teacher who was about to scold him about his school uniform.

Tenma’s friends, Eri, Mikoto, and Akira, all inform her that they will be in the same class, 2-C. Harima overhears and makes his way to the class listing boards. He concentrates his “will power” to make his name appear in Class 2-C as well, but is interrupted by Yoshidayama who tells him that he is in Class 2-D. Angered by the outcome, Harima punches Yoshidamaya and looks up at the board, only to find that the name in 2-D was Harry MacKenzie, not Harima Kenji. Harima goes back to searching for his name, but is mortified when he cannot find his name anywhere. Nenji Ryuu, a faculty member reminds Harima that he is repeating a grade, therefore, his name would not be listed in any of the second year sections. Defeated, Harima leaves.

After more encouragement from Yakumo, Tenma finally decides to search for Karasuma’s name. To her delight, he is also assigned to Class 2-C. However, she overhears him saying that he is leaving to America in two days.

At home, Tenma is moping about Karasuma leaving. She vehemently declares that she will do something about it, but ends up wasting the whole day doing random house chores all the way into nightfall. As she gets ready to sleep, she finally regains her courage and realizes that she will regret it if she does nothing. She makes up her mind to confess in a letter. Tenma works diligently until morning and ends up writing all her feelings into a long scroll.

Once she gets to school, Tenma leaves the scroll in Karasuma’s shoe locker. She waits from a safe safe distance and watches him read the scroll. He finishes reading sometime in the afternoon but then ends up unfolding the scroll from the beginning to reread. In the end, he finishes after the sun has set and concludes aloud that there was no name, sending Tenma into a pit of despair.

The next day, Tenma is pleasantly surprised when she sees that Karasuma is still in the class. Her friends inform her that he got permission from his parents to stay for one year. It's revealed through Karasuma’s private thoughts that he delayed the transfer because of her scroll.

At the library, Tenma reflects on everything that has happened so far and checks out a bunch of books to read up about love. She mistakes “The Art of War” for a book on love. The book states that she must know herself, so she goes over all her qualities. She concludes that physically, she is average and skill wise, she is subpar at everything. Refusing to give up, she reads the next part, but has trouble understanding the meaning. She asks the person next to her for help, and to her surprise, it turns out to be Karasuma. Tenma becomes embarrassed and runs off. She comes to her senses quickly and makes a plan to have Karasuma read words that sound like suki (love/like). When she puts her plan into action, the guy next to Karasuma ends up reading it instead. She tries again, only to fail, but in the end he does acknowledge her and bids her farewell.

Harima is sitting menacingly in class 2-C. Some students gossip about how he got into the class, believing that the threatened the staff. In a flashback, it’s revealed that he begged the teachers to promote him. Later, during a break, he muses on how to confess to Tenma, and is inspired to write a love letter when he finds a challenge letter in his shoe locker. Harima leaves a love letter in Tenma's locker asking her to meet him behind the gym at 4 pm. Once it’s time, he hurries off to the location and spots Tenma waiting for him, however, he is stopped in his tracks when he sees that Tennoji, the person who wrote him the challenge letter, is also waiting for him in the same location. It turns out that Tennoji’s challenge coincidentally happened to be at the same place and time.

Tennoji is fuming over Harima being late for the challenge but he gets distracted when he notices Tenma standing nearby. Tennoji courteously asks her what she’s doing here. Tenma shows him the love letter, which he snatches from her and reads aloud. He then laughs and mocks the writer. Tenma, however, expresses that she is touched by the warm and thoughtful letter. Being captivated by her kindness, Tennoji takes credit for Harima’s love letter, which was not signed, and confesses to Tenma. Tenma gracefully rejects Tennoji and leaves.

Since Tenma is gone, Harima finally walks out from his hiding spot to confront Tennoji. Tennoji cries over his recent rejection and Harima comforts him for a second before he knocks him out. Harima then proceeds to berate an unconscious Tennoji for insulting his love letter.

On her way home, Tenma stops by a bridge and sees Karasuma riding a bicycle. She gets the idea to ride a bike to school to get closer to him. At the same time, Harima, who is beneath the bridge, sees Karasuma as well and has the same idea as Tenma.

In the morning, Tenma sits on a bike and waits by a street for Karasuma to pass by, but he bikes past her without noticing her. She hurries after him to catch up. Up ahead, Harima sits on his bike and waits for Tenma to greet her, but due to her concentration in catching up to Karasuma, she bikes past Harima without noticing him. Without wasting time, he quickly bikes after her. The three continue to bike at an extremely fast speed, with neither being able to catch up to their target, until they reach the school.

During class, both Tenma and Harima fall asleep from overexerting themselves earlier. During her sleep, Tenma nudges her eraser off the desk, which Karasuma picks up and returns to her. Eri, who observes with Akira, note how she missed her chance to talk to Karasuma.

In order of appearance: 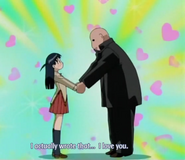 Tenma's vision of biking with Karasuma

Harima's vision of biking with Tenma

Tenma and Harima passed out from biking
Add a photo to this gallery
Retrieved from "https://schoolrumble.fandom.com/wiki/Season_1_Episode_01?oldid=8112"
Community content is available under CC-BY-SA unless otherwise noted.