Easy Rider is the second chapter of the manga School Rumble, forming part of Volume 1.

Kenji Harima, a high school delinquent, looks forward to the start of the new semester. He is determined to be in the same class as his love interest, Tenma, but finds out that he has to repeat a year.

Kenji Harima, a delinquent high school student, ponders the mysterious word, “suki” and looks forward to the start of the new semester. Tennoji, one of the thugs Harima had just beaten up vows to get him back. Harima gives him a swift kick before heading off to school on his motorcycle. As her arrives to school, Harima spots Tenma Tsukamoto, the girl he has fallen in love with. He is so distracted with his determination to be in the same class as her that he unwittingly knocks out a teacher. He then approaches the class division list and finds out that Tenma is in Class 2-C. He decides to use a concentration skill that requires 10 seconds of his undivided attention to get into the same class. As Harima begins to countdown, Yoshidayama interrupts him, telling him that he is in Class 2-D. Angered by the interruption and the outcome of the class, Harima punches Yoshidayama. He takes a look to confirm but finds out that the name in 2-D was actually Harry MacKenzie, which is a foreigner’s name, not Harima Kenji. He punches Yoshidayama again for the error before getting back to his search. After a few moments, Harima realizes he is not in any of the class lists. Nenji Ryuu, one of the faculty, informs Harima that his name is not listed because he is supposed to be repeating a yea.

In order of appearance: 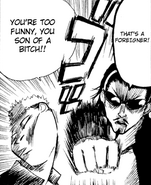 Harima finding out he has to repeat a year
Add a photo to this gallery
Retrieved from "https://schoolrumble.fandom.com/wiki/School_Rumble_Chapter_002?oldid=8907"
Community content is available under CC-BY-SA unless otherwise noted.