Napoleon is a small piglet with stubby legs and a round belly. Unlike most animals, he is depicted in a more simplistic way with dots for eyes.

Harima is Napoleon's owner, so there is no doubt that he feels strongly about him. Although Napoleon does not think or talk like a human, (Like Pyotr does) we can assume that he has some strong bond with Harima.

It is possible that Napoleon has a strong feeling of hate towards Tenma. This hate may have started at the Suou family cook out, where Tenma told Harima how much she loved pork, in front of Napoleon.

Napoleon does not actively harbor any ill feelings toward Shigeo, but he did trip him during the sports festival causing him to lose the 100-meter race. Other than this incident, Napoleon does not pay much mind to Shigeo even when he is yelling at Harima. 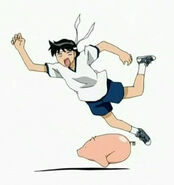 Napoleon tripping Shigeo
Add a photo to this gallery
Retrieved from "https://schoolrumble.fandom.com/wiki/Napoleon?oldid=8177"
Community content is available under CC-BY-SA unless otherwise noted.