Megumi Sagano is the official matchmaker in the school. According to her, she has managed to set up ten couples together in the past year, a new record for her. None of these ten couples appear to have actually shown up in the anime or the manga, although it's possible the Madoka Kido and Shigeo Umezu pairing is one of the ten. She is also the bassist for Class 2-C's band and likes to play basketball.

Being the class matchmaker, Megumi loves to gossip about other people's love affairs. Most recently (in the anime), she was interested in Eri Sawachika relationship with a certain delinquent. From her appearances so far, she shows a very open and outgoing character.

Ooji Karasuma, Takeichi Fuyuki, Tsumugi Yuuki, and Karen Ichijo: These four play in the band together with Megumi. She regularly has lunch with Karen, Yuuki, and class rep Mai Otsuka. 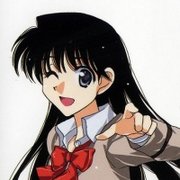 Add a photo to this gallery
Retrieved from "https://schoolrumble.fandom.com/wiki/Megumi_Sagano?oldid=9512"
Community content is available under CC-BY-SA unless otherwise noted.