Kenji Harima (播磨 拳児, Harima Kenji) is the deuteragonist of the School Rumble series. He is the younger cousin of Itoko Osakabe who is in love with Tenma Tsukamoto.

In middle school, Harima was a well-known delinquent. However, after saving Tenma Tsukamoto from some ruffians, he falls in love with her and eventually reforms himself.

Currently a high school student, he divides his time between drawing manga and trying to win Tenma's heart.

Harima’s indisputable talent is fighting. Even though he never studied any form of martial art, his fighting skills, developed through constant street-fighting, matching those of a black belt. Even though he’s fought many times with Haruki Hanai, a black belt in Kempo and Aikido, their matches always end up in a draw.

At some point in the story, Harima develops the ability to communicate with animals, turning him into a sort of psychic, and he uses this to do fortune-telling on the streets. This unusual talent draws the attention of Tenma’s younger sister, Yakumo, who always wanted to read her cat’s mind. He also has a large number of animals.

As a way to express his feelings and to distract himself from Tenma, Harima starts drawing manga. He turns out to be quite good at it and his work impresses the chief editor of a famous publisher, who urges him to continue and participate in a contest. Because of his advice, Harima seeks out Yakumo’s help and she ends up becoming his assistant.

Even though Harima’s ineptitude in schoolwork is only matched by Tenma’s, unlike her, he’s very good at and excels in any kind of sport. Other talents include riding a motorcycle.

The center of Harima's affections. Most of the scenarios in School Rumble revolve around Harima's obsessive pursuit of Tenma. This frequently gets him into all sorts of problems, most notably with Eri Sawachika. While he used to rarely attend class and often picked fights simply to enjoy the pleasure of beating people up, after falling for Tenma, Harima decides to come to school just so he can be close to her. Because of an earlier misunderstanding, he now has to wear sunglasses and grow a beard and moustache to conceal his identity from her, for fear that she might reject him. Tenma, however, consistently remains oblivious to Harima's amorous intentions until (at the end of the anime) she's at the airport with Harima and says to herself (after boarding the plane) that she heard him saying to himself that the reason Harima took her to the airport, (to fly to America and be with Karasuma) was because he loved her. She also says she might have known about Harima's feelings for her even before then.

The bane of Harima's existence. No matter how hard he tries to chase after Tenma, he inevitably ends up in misunderstandings with Eri. Harima and Eri have numerous misunderstandings over the course of the two seasons of anime, the manga, and the OVAs. Despite their constant bickering, Harima and Eri work extremely well as a team. Their love/hate relationship has formed the basis of the ever popular Flag Faction. Harima refers to Eri by the nickname "Ojou," meaning something along the lines of "Madame" (teasing her social status). In the English dub he refers to her as "Rich Girl."

For most of the anime/manga series, Harima seems to hate Eri, and never shows any romantic interest in her, however in later parts of the series, Harima comments that Eri is a good person, and even his friend. He even tells her he's helping her as a friend when he agrees to pretend to be her fiancé at one point.

Harima is the first guy Eri has ever been interested in, despite that other guys hit on her all the time and that once Harima confessed his love to her by mistake (he thought it was Tenma, but he was being blinded by the sun and injured from falling down a flight of stairs). However, in the parallel world story, School Rumble Z manga, where it shows the School's graduation ceremony, Harima and Eri attend the ceremony together. It then shows Harima and Eri standing in the doorway of Karasuma's hospital room, with Eri holding a baby.

Harima's manga assistant and closest friend. Based on his interest in Yakumo's sister, Tenma, he refers to her as "Imouto-san," meaning "Little sister." Eri mistakes their relationship to mean that the two were dating, leading to further misunderstandings between the two. Yakumo eventually falls in love with Harima and eventually confesses her feelings to him, but it is unclear if Harima felt the same way (but he probably didn't because he was still in love with Tenma at the time).

After getting kicked out of his house by his cousin Itoko, Tae gives him a place to stay. Tae continues to show up in his life as she begins working at Yagami High School as the school's nurse. Tae constantly calls Harima "Hario" and is in fact in love with him. According to her, she was his "landlady" and he was her "tenant". Whenever she sees Harima when no one else is around, she hugs him and screams "HARIO!". Eri seems to be jealous of her as she is of Yakumo (since Yakumo fell in love with Harima).

School Rumble’s science teacher, Itoko is actually Harima’s cousin. After he leaves home, she takes him in and allows him to live in her house--not for free though, and he is often late with the rent. She kicks him out of the house on two separate occasions.

A very smart woman, Itoko possesses a strong personality and she finds it amusing to see a strong guy like Harima so helpless and weak when it comes to Tenma. For this reason she doesn’t waste the opportunity to pick on him and show him up whenever she can find one.

Harima’s younger brother, Shuuji gets along well with his brother and has a big crush on Tsukamoto Yakumo.

His best friends are his animals:

This little frog is responsible for one of Eri’s bursts of anger, when he predicts her father liking curry better than nikujaga ("meat and potatoes" in the English dub). That is the last time Harima ever told a fortune.

Harima’s pig, who can talk to him. Napoleon causes an accident at the Sports Festival, when he crosses Shigeo Umezu’s path during the track race. Also at Mikoto Suoh's hotpot party when he saw Harima and Tenma eating and talking about a pork soup, he trembles and begins to destroy the party.

As big as he is, this Giraffe is only a kid and loves Harima very much. After Itoko Osakabe decides to move all the animals away from her house, where Harima keeps them, Pyotr runs away looking for Harima, and gets lost in the city. He later finds Harima just in time to stop him fringom confess his feelings to Tenma. In season 2, when Pyotr finds out that Yakumo Tsukamoto is sick, Pyotr looks for Harima. He hides under the table and telling him that he needs help for his friend. But, Harima misunderstands that the one in danger is Tenma. So he rides on Pyotr's back to the Tsukamoto residence where he finds Yakumo, lying on the floor because she has high fever. He places Yakumo on her floor bed and accidentally he fells asleep beside her. Iori, Yakumo's cat, comes by and puts his paw on Yakumo's forehead, causing her to flash back to an incident from her childhood where Tenma made a rabbit out of a snowball and put it on Yakumo's forehead when Yakumo was sick. Pyotr sees what Iori is doing and does the same thing, putting his foot on Harima's forehead... which makes Harima uncomfortable.

At first, Harima sees Karasuma as a comrade, mistaking him to be an outsider like himself. He is one of the few students Harima actually tries to befriend and have lunch with. However, when Harima discovers that Tenma is romantically interested in Karasuma, he comes to hate his guts. Normally, if a guy was after Tenma, Harima wouldn’t think twice to beat the crap out of him; but since in this case it is Tenma who loves Karasuma, Harima decides to step aside and not interfere, thinking of her happiness instead of his own. Harima’s hatred for Karasuma goes up a notch when, while trying to get acknowledged for his manga, he discovers that Karasuma just happens to be the famous mangaka whom Harima has always admired.

Harima’s relationship with Hanai could be somewhat described as friendship/rivalry. Their so-called enmity began with a misunderstanding over Yakumo, whom Hanai loves. Since it’s the custom in Japan to call people by their family name, Harima believes Hanai to be after Tenma, Yakumo’s older sister and Harima’s love interest. The multiple misunderstandings and epic battles that erupt as a result make for some of the most enjoyable moments in School Rumble. Despite all this, Harima and Hanai respect each other as fighters, and eventually join forces to defeat their common rivals from class 2D during the Sports Festival.

The first guy to get beaten up by Harima in the anime, Tennouji has vowed to defeat Harima and take over the title of school tyrant. After losing many fights to Harima, he finally achieves his dream of beating Harima, who, depressed and heart-broken over Tenma, has lost the will to fight.

Small and fragile, shy and cowardly, Nara makes for an unlikely rival for Harima. Despite this, however, rarely do we see Harima more worked up and preoccupied, than when Nara is around his beloved Tenma. The reason for this is that contrary to the likes of Tennouji, Nara is well liked by Tenma and she always acts friendly to him; so every time Nara comes near Tenma (whom he has a crush on), Harima somehow always manages to get in between and scare him away.

Harima’s rivalry with Harry is solely based on male ego, and is a rather insignificant one, at least during the first season of School Rumble. Harima meets Harry in a street alley by chance, during Harry’s fight with Hanai, who initially mistook Harry for Harima. Harima then joins in the fight, leaving Harry impressed by both his and Hanai’s fighting skills. Later on they face each other during the Sports Festival, when Harima beats Harry at the relay race. 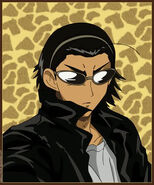 Harima, when he was getting interviewed

Harima, during his time on the ship 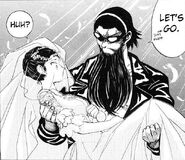 Add a photo to this gallery
Retrieved from "https://schoolrumble.fandom.com/wiki/Kenji_Harima?oldid=9925"
Community content is available under CC-BY-SA unless otherwise noted.